The UBC TALKS webinar about water as a resource in a climate-resilient city took place on 25 May 2021, bringing into the discussion speakers from the Baltic Sea Region and beyond. How to make your city climate-proof and attractive, how to engage citizens into the process and benefit from it, and where to look for efficient yet applicable solutions and inspiration? Let’s find out the answers!

City as a sponge

The keynote presentation “Managing water sustainably to strengthen urban resilience” was delivered by Ms Barbara Anton, the Senior Coordinator at ICLEI, Urban Water Management, Sustainable Resources, Climate and Resilience team. With water having a big implication on the quality of life and the local economy, Ms Anton stressed that we need to make sure that in the process of making urban water infrastructures more resilient, the cities also take into consideration increasing the quality of life for the citizens. The money invested into the change need to also have positive implications on other areas, supporting the cross-sectoral collaboration. Only a holistic approach can construct truly sustainable urban ecosystems: urban adaptation has to be closely connected with the urban greening and, in turn, biodiversity.

Make sure that we work together with all the stakeholders that are relevant in the water sector in the city. Not only the local government, water utilities, but beyond to regulators and water users, the general public in the end.
– Barbara Anton

Ms Anton brought several examples from European cities outside of the Baltic Sea Region implementing this vision. Ghent in Belgium aims at making the city more robust to climate change by placing an emphasis on urban greening and allowing more urban space for water. The city of Almada in Portugal significantly enhanced biodiversity on the coast while protecting the coastline by planting local willows. And the third example, Berlin in Germany promotes the sponge city approach and plans new urban developments with the compulsory decentralised stormwater management.

The next presentation dived deeper into the inspiring solutions from all around the globe, as Professor Floris Boogaard from the Hanze University of Applied Sciences, Groningen, gave a speech on “Promoting more green and blue spaces in urban areas”.

Every country has its own worst-case scenario.
– Floris Boogaard

Mr Boogaard began by outlining the important principle: while climate change is a global problem, adaptation to it is implemented locally. Such local examples are the main interest of the database ClimateScan that was presented to the audience. ClimateScan already hosts over 6 000 examples of nature-based solutions around the world – all submitted by the citizens. Citizen science helps to involve into the dialogue, grab citizens’ attention and engage them into the climate adaptation measures. Not only effective – such citizen involvement is also highly beneficial, as they are the local experts on the area, know when the area is flooded or when there is a draught, and can react accordingly, providing the data on the environmental monitoring.

Narrowing the focus to the Baltic Sea Region, Mr Pekka Parkkila, the water management expert at the Southwest Finland Centre for Economic Development, Transport and the Environment (Varsinais-Suomen ELY-keskus), presented the report on natural flood risk management solutions in the Baltic Sea region. He particularly focused on the nature-based solutions, which, although usually implemented on a small-scale, should be brought to the large-scale systemic implementation to gain better recognition and funding.

Nature-based solutions are not foreign to any Baltic Sea states.
– Pekka Parkkila

Mr Parkkila emphasized that the nature-based solutions, although being useful and attractive, are not the most acutely effective measure when facing an imminent flood risk. These solutions can absorb water, not allowing too fast discharge to the recipient body and thus preventing flooding, they can slow it down to avoid overflow, or redirect the water to the space where fixing the potential damage can be either easier or cheaper. However, for the faster reaction to the heavy flooding, the city also needs to get equipped with grey or hybrid solutions.

The fourth presentation brought the knowledge accumulated in the transnational project NOAH – Protecting the Baltic Sea from untreated wastewater spillages during flood events in urban areas. Mr Ivar Annus, professor at the Department of Civil Engineering and Architecture of the Tallinn University of Technology, introduced participants the topic of “Preparing for extreme weather events – NOAH project results”.

The NOAH project considers reducing the untreated spillages to the Baltic Sea from two sides. First, it looks into the prevention of discharges of nutrients and hazardous substances from the stormwater runoff by decreasing flooding risks. Second, it tested active methods to decrease spillages of untreated wastewater during flood events. Presenting these, Mr Annus highlighted the importance of making the existing infrastructure climate-proof.

With eight pilots done in the NOAH project, most of them take place in smaller cities: “Smaller pilots are a nice playground for scientists,” points out Mr Annus. Usually it is the smaller cities that are facing the lack of knowledge and staff the most, since the personnel might share multiple tasks. When tested, small pilots can be transferred to the larger plots, uptaken by other cities in the Baltic Sea Region, inspired by the successful results of the climate adaptation. 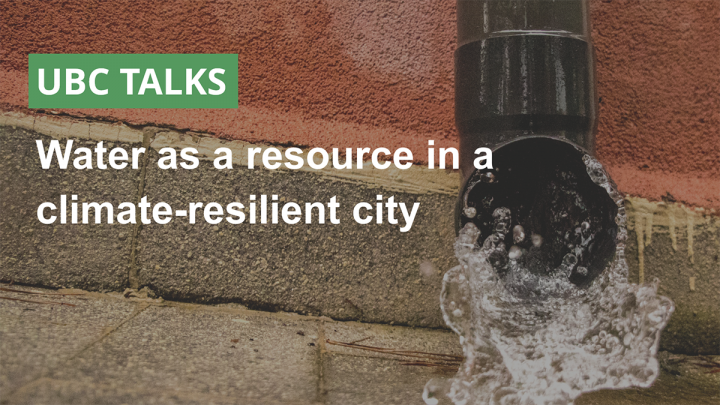 In the platform cooperation, BSR WATER has published the report "Regional and national policy recommendations for implementing the integrated stormwater management in the Baltic Sea Region" introducing the recommendations for implementing sustainable and integrated stormwater management in the BSR on the basis of accumulated knowledge and practices of forerunner BSR cities.

UBC TALKS is a series of webinars launched by the UBC Sustainable Cities Commission to discuss various topics of the sustainable development with the cities and experts in the Baltic Sea Region.

BSR WATER co-organised several webinars, which you can rewatch anytime: