Environmental status of the Baltic Sea

Eutrophication persistently remains the major threat to the Baltic Sea marine environment. The last HELCOM assessment of the Baltic Sea environmental health (HOLAS II) showed that all Baltic Sea sub-basin remained in heavy eutrophic conditions. This fact is proved by almost all related indicators showing that the marine environment is far from good environmental status. Eutrophication results in vast algae blooms, reduction of water clarity and, which is the most threatening, formation of extensive anoxic and hypoxic zones on the sea bottom. Those dead anoxic zones already occupy of about 22% of the Baltic Sea when the hypoxia was observed on more than 30% of the sea floor.

Eutrophication process was caused by long lasting oversupply of the marine environment by such vital for the biota elements as nutrients – nitrogen and phosphorus. The peak of the nutrient load in the Baltic Sea marine ecosystem was observed in 1970s. Since that time input of nutrients is being continuously reducing. Only in the last two decades the input of nutrients was reduced for 14 and 24 percent for nitrogen and phosphorus respectively. But, despite the effort jointly undertaken by HELCOM countries, nutrient load on the Baltic Sea marine ecosystem remains remarkably higher than scientifically proved maximum allowable inputs for these components which were agreed by HELCOM countries as the Baltic Sea environmental targets (HELCOM 2018).

The main nutrient flows are observed in agriculture and wastewater management sectors. Waste waters are enriched by nitrogen and phosphorus and being released to the aquatic environment without proper purification contribute to the total nutrient load. HELCOM Recommendation 28E/5 sets strict requirements for nutrients removal from waste waters at waste water treatment plants. HELCOM countries all together have already implemented massive investment programs on improvement of waste water sector which resulted in more than halving of nutrient input from point sources in the last two decades. It contributed greatly to the nutrient input reduction but resulted in annual generation of more than 3 million tons of phosphorus reach sludge which is considered as a waste.

Despite the harmful effect of nutrients on the aquatic environment, they remain vital components of agricultural production. Though, large amount of nutrients is annually leaching to the Baltic Sea agriculture still export a lot of mineral fertilizers which hinders nutrient input reduction intensifying nutrients flows. Effective nutrient management and maximal utilization of regionally available resources of nitrogen and phosphorus for agricultural production become the key prerequisites for achieving regionally agreed nutrient input targets.

Not waste but valuable resource

The Regional Nutrient Recycling Strategy, which development was committed by the HELCOM Ministerial Declaration 2018, is intended to manifest the vision and objectives of sustainable and safe utilization of regionally available nutrients for food production and development of green areas in the region. One of the key messages is that nutrient enriched biomasses are to be considered not as wastes but as valuable resource. This, in ideal world, would close nutrient loop, reducing nutrient input to the aquatic environment to the natural level and securing availability of regional nutrient resources, especially phosphorus for the Baltic Sea countries.

The Strategy will also include measures to facilitate nutrients recycling, especially in agriculture and waste water management sector. For the later phosphorus is the key element. BSR WATER platform project has a task to elaborate a Pallet of solutions which will illustrate measures suitable for various waste water management systems and serving to increase recovery of phosphorus contained by sewage for further use in fertilizing products. The proposed solutions will not be focused on description of specific available technologies but become a guideline for phosphorus recycling taking into account various geographical, economic, social and other conditions. The solutions are intended to consider the whole water management process accounting various types of sewage systems.

Capitalizing on experience and results from previously accomplished or ongoing projects the BSR WATER project consortium gives examples of the best practices known in the region.

This outcome of the BSR WATER project became one of the key pillars supporting the HELCOM workshop on measures for nutrients recycling where the proposals for such measures was collected. The workshop took place on 5-6 February 2020 in Helsinki. The workshop was opened by 3 key speeches presenting: assessment of nutrient flows in the region (ProMan consulting), measures in agriculture (SuMaNu project platform) and solutions in wastewater sector (BSR WATER project platform). Inspired by the key presentations a half of a hundred participants from almost all HELCOM countries proposed about 140 measures to enhance recycling of nutrients. These input lays solid background for further development of the Regional Nutrient Recycling Strategy in HELCOM work groups. Such activeness of the participants prominently demonstrates that the theme is relevant in the region and the Strategy is of high demand and timely. 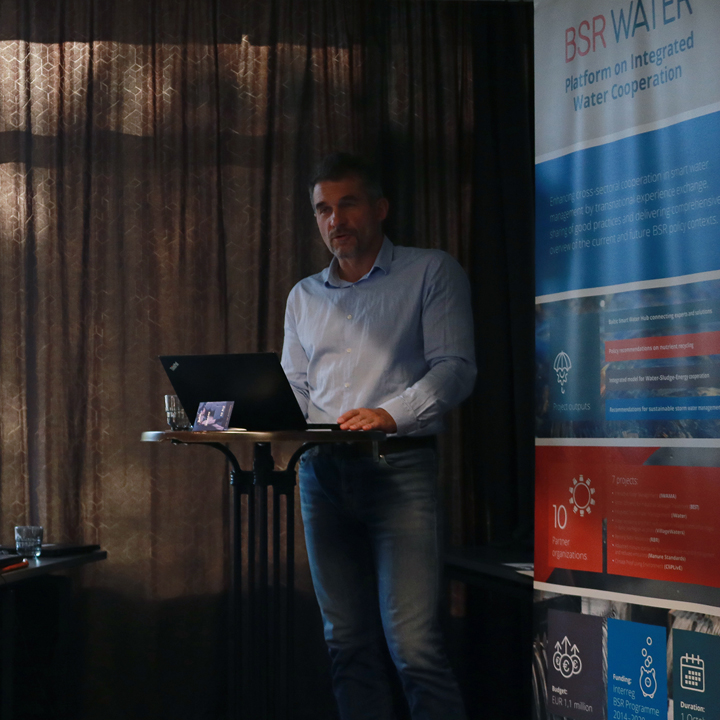 BSR WATER input into the Strategy

Previously the input of BSR WATER into the Regional Nutrient Recycling Strategy was discussed during: